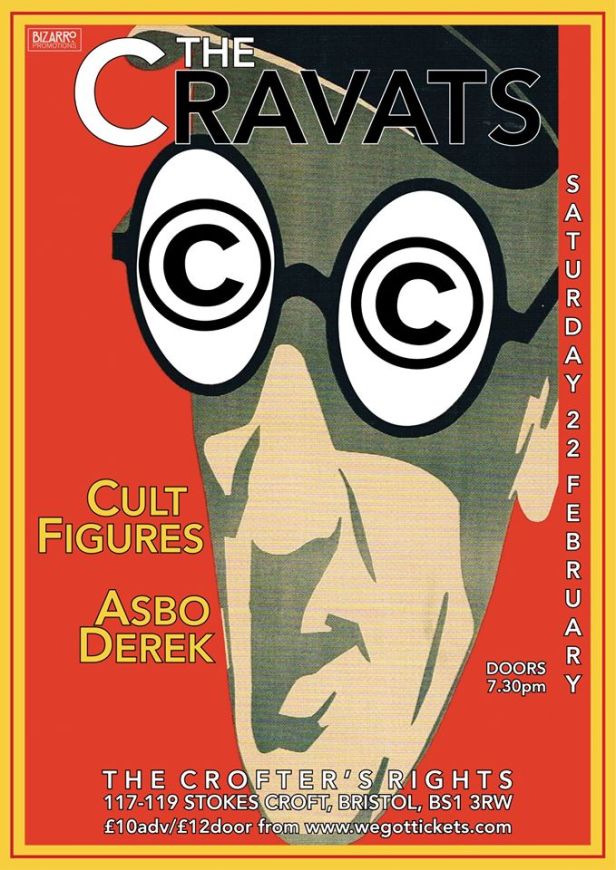 THE CRAVATS PLAY their first gig of 2020, a few weeks ahead of the release of their new album, headlining a three-band line-up in Bristol on 22 February

“The Cravats are vicious in their intent, yet relaxed taste abounds” – MARK E. SMITH “The Cravats are one of the greatest bands in the history of music” HENRY ROLLINS “Whenever I start to feel important, I think ‘well, I never did much for The Cravats and I didn’t stop Toyah” JOHN PEEL To celebrate the release of their new LP in February 2020, The Cravats are returning to Bristol for only the second visit in their 42 year history. The Cravats don’t do a vast amount of gigs or release a vast amount of records. They only do both when they feel it is worth doing and when they have formulated a plan to move the weird, cartoon world they inhabit another notch towards somewhere they haven’t been before. The Cravats have always been unique which is why John Peel loved them, Small Wonder Records signed them and Penny Rimbaud of Crass took them into the studio. Experimenting with sound, embracing the absurd and not fitting in are all traits they are justly proud of. Their releases are events, their gigs are eventful. Sax-riddled, bass laden, dada fuelled oddness will abound. Join us.

The UK punk band Cult Figures were formed in 1977 in Birmingham. Their debut single “Zip Nolan” was released in 1979 on Rather Records – the label of their friends and fellow punk visionaries, Swell Maps. Paul Morley made the record “Single Of The Week” – describing it as “moronic minimalism”. The 1980 follow up “Cult Figures In Love EP” spawned the classic “I Remember”. Before the logical next step of recording the debut album, however the band split. Now, in 2019 the album has finally been recorded and released and the band are back to perform it live!

Asbo Derek’s sound is classic garage punk rock and they have a lot of (important) message songs but all have great choruses to join in with and many come with a running gag and punchline. There are songs about demanding outmoded hairstyles, going to see shit bands when you’re stoned (the bouncy ‘On The Night That James Were Excellent’) and odious middle-class couples slumming it on a bendy bus around town.