“It will do wonders for Britain”, former Sex Pistols’ frontman Johnny Rotten told British tabolid The Sun back in November, describing the forthcoming marriage of Prince William and Kate Middleton. “Their wedding will become like an advertising campaign […] It will put England back on the map and we’ll be given a voice for the first time in ages”, he added.

Elaborating on his excitement about the upcoming royal wedding, Rotten went on: “People think I hate the Royal Family, but that’s not true. My animosity is towards the institution, not the people themselves. […] They get my backing to have a happy marriage. As people there’s nothing wrong with them. Yippee.”

“There is a despondency looming over Britain just now. People need to open their eyes and see some good nature at work. I don’t think Kate is just after his money and the title. There is more to this. It is love.”

He continued: “I loved the fact William gave Kate Diana’s engagement ring. I was talking to my wife Nora about it and we think that was a very genuine, deep thing to do.”

“It forms a very deep emotional bond. He could have burdened her with an heirloom from the other side of the family – something from the Queen’s collection. How much worse would that have been?” 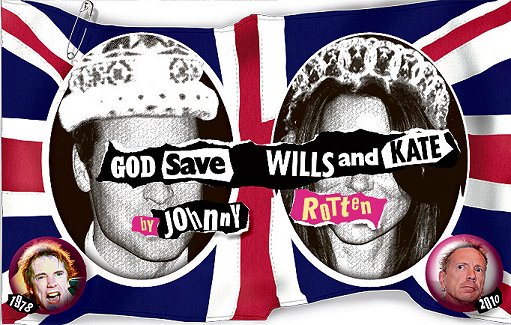