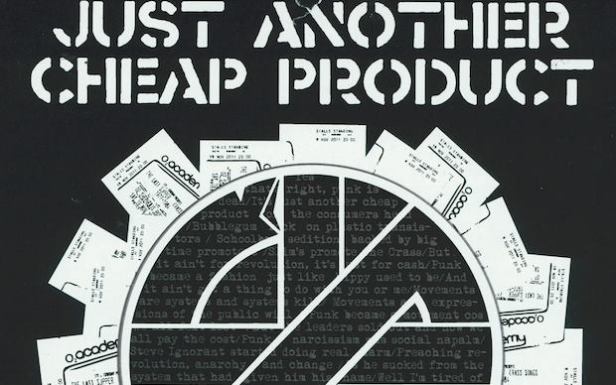 A few weeks ago, Chris Willsher (Bus Station Loonies, Oi Polloi, Ruptured Ambitions) announced on Facebook that he was working on a new theatrical production that would revisit the history of Crass. “With more thanks than I can express in a mere post to Penny Rimbaud, Gee Vaucher, Steve Ignorant official and Annie Bandez”, he explained, “it’s ‘all systems go’ with the Crass play.” Adding: “Watch this space for further excitement.”

The Hippies Now Wear Black spoke with Chris about his plans for Crass – The Play and about what the audience might expect, come opening night…

How long have you been thinking about this project? Is this a recent thing, or something you have been contemplating for a while now?

This has been a fairly long process in coming together. I think I probably first toyed with the idea of a play about Crass around twenty-odd years ago. It’s been buzzing about me head off and on ever since, but most of my plans take a while to actually take shape, so I couldn’t be happier it’s gone beyond the idea of just a plan now!

Is the work of Crass and the spirit of anarcho-punk an important reference point for you personally?

Massively. I was first introduced to the delights of Crass when I was 13. Usual tale, am sure, but they completely made me re-look at life. And were hugely instrumental in making me believe it was actually possible to become involved within all kinds of aspects of punk. Doors flew open.

Will this be your first foray into the world of theatre, or do you have background in theatre and theatrical productions?

I do have a bit of a ‘luvvie’ background. In fact, a bit of big one. Was involved with amateur theatricals from about the age of about 11, written a coupla’ plays along those lines, and went onto to doing a Theatre and Performance degree a few years ago. I’ve trod boards, been in a few films and generally overacted for much of my life. My greatest love is in the writing, however, so I couldn’t be more thrilled right now.

I’ve never been one to do ‘slick’ in any shape´or form, so my betting is it’ll be very DIY

What type of theatrical productions, or which theatrical playwrights, are your inspiration for this work?

Blimey. I’m not really sure. I’ve always been a fan of the theatre of the absurd and grotesque (Alfred Jarry and Antonin Artaud spring to mind) and also the political/historical yet accessible theatre of the likes of Dario Fo and David Pownall, and I love Molière‘s plays. That said, I’m also a huge fan of farce and comedy, in particular Ben Travers, and Galton and Simpson, so who knows how it’ll turn out? If I could sneak in elements of any of ’em, I’d be over-the-moon.

What made you opt for a theatrical play, rather than, say, a film or a video production?

Two reasons, really; my love of the live performance, and my hopes it could be the closest experience to a latter day Crass gig. Secondly, because decent films have been and are being made. I felt there was a bit of a niche and it was a slightly different angle. Best leave the film making to those who know what they’re doing!

Have you written about the ‘story of Crass’ in any other ways before now (such as fanzine or magazine articles)?

The nearest I came to any kinda of tribute to Crass was compiling You’ve Heard It All Before, the Crass covers album from mucho years ago (1993 – several before the much better-selling and publicised album by Jeffery Lewis). This was my own way of paying respect to their work and, sadly, at a time when any kind of retrospective about Crass stirred scant interest. Not like it would today. It was, however a project of which I felt massively proud and I’ll always be grateful to all the artists involved and, of course, to Crass themselves for the go-ahead to realise my project in the first place.

Is this intended to be a low-budget, DIY production, or a fully-funded theatrical project?

I’ve never been one to do ‘slick’ in any shape´or form, so my betting is it’ll be very DIY, low-budget and underground. It’s my comfort zone.

I appreciate that things are in a very formative stage at this point, but what can you say about how you will be approaching the story?

All I can say right now is the research has been an absolute labour of love. The approach won’t be so much a straight-forward story telling, but more a concentration on a particular aspect of Crass’s history, with nods and references to other japes on the way. Right now, I am trying to piece together as many sides of the same story as I can.

There’s a lot to cover when documenting the activities and impact of Crass, and it’ll be hard to cover everything in a two-hour show. What are you planning to focus on and prioritise?

Is it gonna be two hours? Sheesh – that sounds like a lot of work! No, you’re absolutely right – there’s way too much to cram successfully into a standard play length. I’m hoping to concentrate upon a particular part of Crass’s history. Not necessarily a part which people most expect. There’ll be nods towards the tales that many folk already know, but I hope not so much that it’ll just seem like a re-telling but just on stage.

I’m hoping to concentrate upon a particular part of Crass’s history. Not necessarily a part which people most expect

Are you planning to use a lot of the words of the band – lyrics, handouts, interviews?

I think that’s got to a vital part of it, yes. All those things, for sure, although again, wanting to put their individual and communal philosophies across without making it too much of a regurgitation. A play about Crass wouldn’t be a play about Crass if it weren’t for inclusion of their lyrics and statements. It’s with uber thanks and love to many of the members that we’ve the go-ahead to utilise much of them. There will be Crass songs, for sure.

Will you focus on the period 1977-1984, or extending things before and after that?

I’m not gonna say too much about that right now, but I hope the end result doesn’t disappoint. There will be aspects which cover either side and in between.

Are you thinking that the songs of Crass will feature as though they are live and rehearsal performances; or will it be more like a ‘musical’, with the songs being part of the story?

The songs which feature will, I hope, pertain to relevant parts of the story, but will probably be more like performances than the traditional ‘musical’ set up. There is nothing like a dame.

Are you planning to have a live band performing the numbers? Will the cast be expected to play and sing their roles too?

Yes and yes. Sounds like a tall order, but am certain it’ll work just fine.

Will the story focus on the band or will it look as well as the people who were followers and supporters of the band?

The plan is to encompass many people within the whole Crass phenomena. Without whom…

Will this be a story for ardent Crass fans, or for newcomers unaware of the band’s work?

I really, really would love it if the end result could appeal to both. I see little point in trying to appeal only to those who know and love Crass’s story and art, but at the same time wouldn’t want to alienate such people either. I hope there’ll be enough that’s new and intriguing to those who know a great deal about Crass, and yet telling a tale that will be of enough interest and edification to those who don’t. You can’t please all the people, but I’m gonna have a flipping good stab at appealing to as many as I can!

Have you been able to get encouragement and backing from former members of Crass? Have any of them made any suggestions or recommendations?

The response I had from certain members thus far has been more encouraging than I can say. I have tried to contact every Crass member (and even one or two who weren’t fully-fledged ‘members’ as such, but contributed greatly) So far as I know, each member of Crass has now been contacted, one way or t’other. And, for those who have already been back in touch; things couldn’t have been more inspiring and positive.

Are you hoping that this production will involve new, young acting and behind-the-scenes talent or that it will be taken on by an experienced theatrical company?

New people, is my hope. Preferably those who may not have much theatrical experience but the enthusiasm to do so. That’s purely because of my own passion for the underground, the unknown and the underdog. I reckon it’d be more in keeping. Wouldn’t really want Michael Gambon and Helen Mirren to play a later-life Penny and Gee… but, then again…

Do you have any idea of where and when you’d like the play to premiere?

In keeping with the whole anarcho/Crass way of things; I’d much prefer it if the play could be performed in non-commercial/non-traditional/ theatrical venues. I’m hoping back rooms of pubs, village halls, community centres, that sort of thing.

How can people find out more, or get in touch with ideas and input of their own?

Please, anyone, for any reason, email crasstheplay@gmail.com or write to me c/o Ruptured Ambitions, Old Forge Cottage, Rushford, Lamerton, Tavistock, Devon PL19 8RY (this address is not my own, so could take a coupla’ weeks in replying, however). I’d love to hear anything from anyone.

What can people look forward to from Crass – The Play?

I would love nothing better than a brand new or rekindled interest in a band that were more of a band and a genre than became to many a way of thinking and life. Most importantly, something different to entertain and inspire.