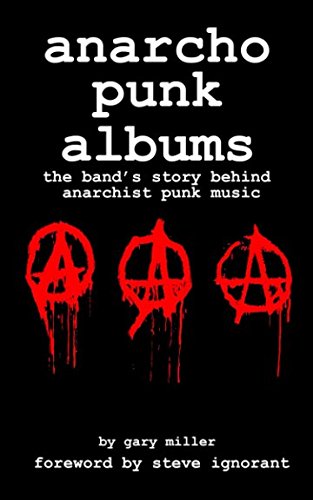 ANARCHO-PUNK IS an ideology of personal freedom. Its artistic self-expression should be available to everyone, regardless of technical ability. The message is far more important than the musical content itself.

During the late 70s and early 80s, many new bands emerged to expound serious anarchist ideas. They embraced the DIY punk ethos, creating zines to be distributed at gigs as well as a mine of information on their often gate folded record sleeves.

‘Anarcho-Punk Albums: The Band’s Story Behind Punk Music’ is a book that explores how some of the most controversial material ever written came to the forefront.

Over a year in the making, through a series of short interviews with band members, we delve into how the groups started, what were the primary political motivations and what they thought of the albums once recorded.

A thoroughly engaging read, we find out about the growth of the squatting culture, the increasing interest shown by the Special Patrol Group (SPG) and MI5, how the albums were often outselling the mainstream pop acts of the time as well as numerous personal thoughts and opinions of fellow bands and individuals.

Punk rock recently celebrated 40 years since the Sex Pistols first burst onto the scene. However, for many of us, the Anarcho-Punk bands and their albums was when the real meaning of the movement came into its own.

Available in both print and Kindle eBook formats.